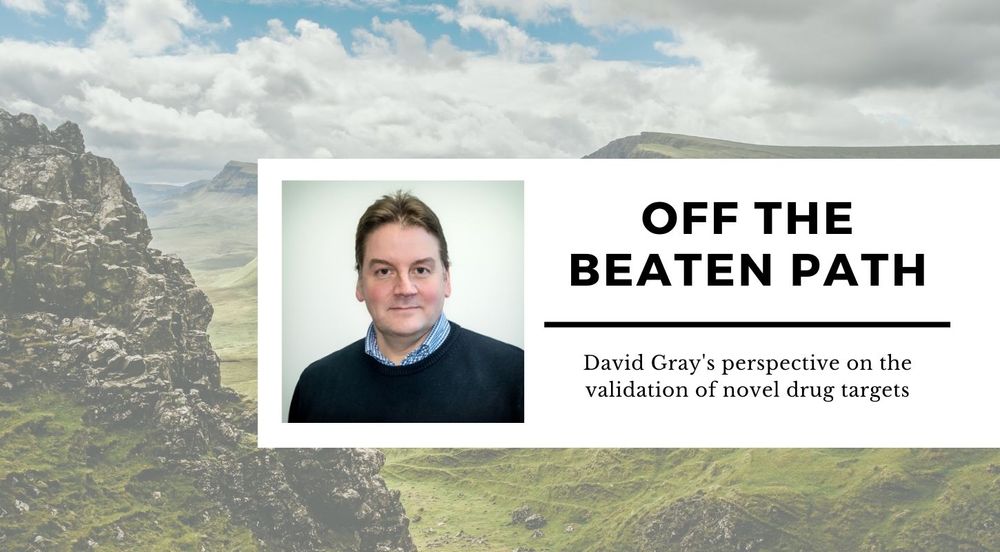 Over a background image of rugged hills on the Isle of Skye, an image of David Gray with the text: Off the beaten path, David Gray's perspective on the validation of novel drug targets

At the latest Integration Day, Open Targets was proud to host David Gray, Head of Biology at the Dundee Drug Discovery Unit (DDU) and Professor of Translational Biology at the University of Dundee.

The DDU was founded to bridge the gap between scientific research and commercial drug development. As a small molecule discovery endeavour, the DDU has a unique approach to identifying novel therapeutic targets and mechanisms of disease.

"In the pharmaceutical industry, drug discovery begins with a commercial assessment; the list of diseases to be investigated is determined based on an evaluation of the market size. Companies will then focus on understanding those diseases, and identifying potential targets. Those targets are further investigated, until a clinical candidate can be selected," David explains.

"The DDU flips this model on its head. We start by selecting targets we believe are novel, and biologically interesting. We then look for small molecule tools we can use to interrogate the biochemistry of the target, the cell biology, and the in vivo biology. We use such small molecules to lead us towards the disease in which they will be both efficacious and safe."

"A critical aspect of our way of working is that tool molecules and their associated molecular data are quickly released to the scientific community," he adds.

David himself is a Principal Investigator on projects within the DDU's Drugs for Neglected Diseases Initiative, Medicines for Malaria, and Innovative Targets Portfolio. He has over 15 years of experience within the pharmaceutical industry, and was involved in the selection of 10 clinical candidates.

During his virtual visit, he shared three key pieces of advice, woven into the story of the PCLX-001 molecule.

In 2006, Wellcome funded one of the DDU's first projects, working on a portfolio of neglected tropical diseases. The team began to investigate targets for sleeping sickness, a parasitic infection (Trypanosoma brucei) transmitted by the tsetse fly. Untreated, the infection is fatal, and at the time, the only treatment available was an arsenic compound that killed 1 in 20 patients.

The DDU applied their small molecule approach to the 30 or so genetically validated targets they identified in the literature. Of this extensive list, they were only able to validate a single target.

Though several factors contributed to this result, "we realised that the biggest issue was the phenotypic methodology we were using," David explains. "We found that the setup of most basic assays is inappropriate to investigate the phenotype in question."

"I don't think this is something we challenge enough."

David's group realised that most infectious disease screening assays are set up with a starting cell concentration that does not allow researchers to distinguish between growth slowing, cytostatic, and cytocidal phenotypes, as the final cell concentrations for these phenotypes fall below the limit of detection. They established a new methodology which could be used for high throughput screening of cytostatic and cytocidal compounds.[1]

NMT as a target for sleeping sickness

The team's single validated target was N-myristoyltransferase (NMT). NMT is an enzyme that catalyses the addition of myristic acid, a fatty acid, to selected proteins. This process is important for the membrane localisation and subsequent activation of around 400 proteins.

In a series of experiments combining genetic tools and small molecule approaches, and in collaboration with Professor Debbie Smith from the University of York, the DDU validated NMT as a target for sleeping sickness.

The team also designed NMT-inhibiting molecules that led to the development of PCLX-001. In the final in vivo tests, they demonstrated that above a concentration threshold, the NMT-inhibiting compounds gave sterile cures, completely ridding the animals of acute parasitic infection.[2]

"Unfortunately, the compounds we used were not suitable for treating sleeping sickness, since the parasites invade the central nervous system (CNS), and we were unable to deliver a sufficient safety margin when delivering CNS efficacy," David explains.

NMT as a target for cancer

Indeed, a variety of tumour types are characterised by an increased expression or activity level of NMT, and key substrates of NMT — such as src family kinases and ADP ribosylation factors — have been heavily implicated in cancer. The first step was to determine which cancers might best be treated with NMT inhibitors, and which mechanisms could be targeted within those cancers.

By profiling a range of compounds in biochemistry assays, and evaluating their activity in a variety of cell types, the team established a correlation between the biochemical potency and the cell-based activity of the compounds: the higher the concentration, the stronger the inhibition of NMT enzyme activity, and the fewer cancer cells thrived.

But there was a glaring problem.

"We were measuring a viability phenotype, not a cell death phenotype," David stresses. "Though we observed potent inhibition of NMT in most cell lines, consistent with the G1 arrest phenotype we had observed, only one of the cell lines underwent cell death."

They therefore set out to understand what made some cell lines sensitive.

Determining which cell lines were sensitive

The team was struggling to make sense of their results. Then one day, after a presentation David gave at the University of Alberta, he was approached by Professor Luc Berthiaume.

"Luc presented me with an alternative theory: NMT is expressed as two isoforms, and his research had shown that some cancers do not express the second isoform, NMT2. He believed that we would obtain different phenotypes depending on whether or not NMT2 was expressed."

"It was a real eye-opener for me."

In fact, Berthiaume's theory was correct: cells displayed an increased sensitivity to the PCLX-001 molecule, based on the downregulation of NMT2. Interestingly, such cells are often found in hematological cancers.[3]

The team's subsequent in vivo studies of acute myeloid leukemia xenografted tumours in mice showed that after 14 days of treatment with PCLX-001, there was no tumour left. Follow up studies confirmed that at the highest dosage, there was still no detectable tumour two weeks after that.

Prof. Berthiaume also created an antibody test to detect the presence of NMT2 in tumour samples – a key step to translating this result to the clinic. If the test detects that a patient has an NMT-deficient tumour, this indicates that PCLX-001 has a chance of effectively targeting the cancer.

"And so," David concludes, "10 years after the DDU's first Nature paper which validated NMT as a target for sleeping sickness, our molecule is heading to the clinic for the treatment of tumours such as B lymphoma in which NMT2 expression has been downregulated."