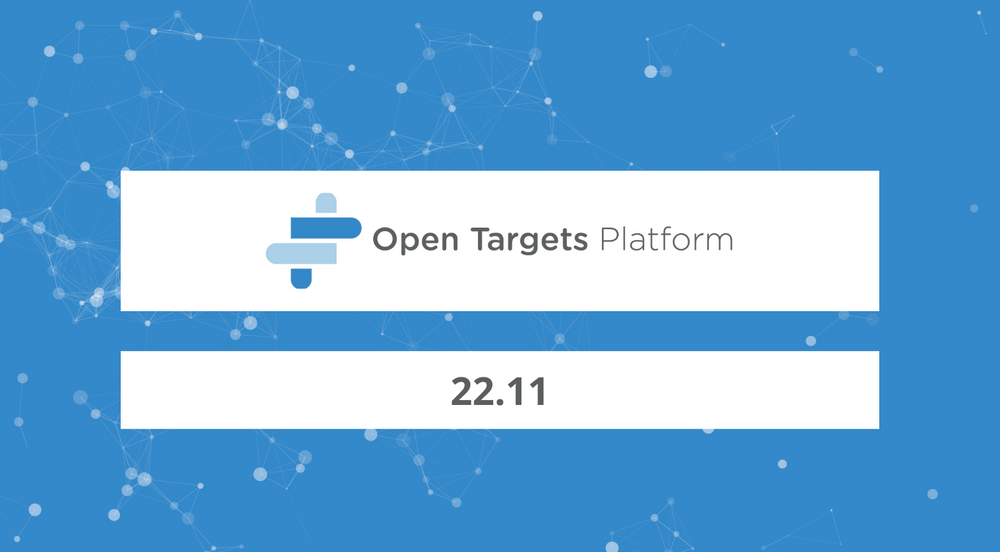 The latest release of the Platform — 22.11 — is now available at platform.opentargets.org.

In addition to continuous updates from our data providers, we have introduced the following new features:

Additional metrics are available on the Open Targets Community.

This collaborative work from the Accelerating Medicines Partnership Parkinson’s Disease (AMP-PD) initiative, the National Institutes of Health, the UK Biobank, and Genentech, has now been integrated into the Open Targets Platform’s Gene Burden widget. This work provides evidence of association for 9 genes, including 7 for which this is the first evidence linking them to Parkinson’s disease in the Platform (B3GNT3, AUNIP, ADH5, TUBA1B, OR1G1, CAPN10, and TREML1).

For most of the genes, the signal could be replicated in multiple meta-analyses. For the 3 genes which didn’t show exome-wide significance in the meta-analyses (OR1G1, TUBA1B, and ADH5), we report the test and cohort in which statistical significance was reached.

We have updated the classifier algorithm we use to categorise the reasons for which clinical trials stopped before their endpoints were met, improving the overall accuracy by 20%.

This feature was introduced in our 22.04 release, and allows users to see the full text reason recorded on ClinicalTrials.gov, as well as the category or categories assigned by our model when browsing evidence in the ChEMBL widget.

The updated model is trained on the basis that multiple classes can be assigned for the same recorded reason, allowing the classifier to learn patterns of correlation between the 17 categories. This means that the model learns to predict categories in the context of the others.

Some of the evidence we integrate from Gene2Phenotype and Orphanet includes information on the functional consequences of variants, which is available to browse in the API. We have added a new column to the widgets to include this information in the web application. Please note, it can be null.

Variants that change the sequence of the translated protein can have functional consequences, for example: altering the protein structure, removing or adding post-translational modification sites, and altering ligand or co-factor binding sites. This is key information to understand how the variant may be involved in the disease mechanism.

This was our last release of the year! Let us know what you think of it on the Open Targets Community.