We have just released the latest update of Open Targets Genetics, a resource which makes robust connections between disease-associated loci and likely causal genes, to enable the identification and prioritisation of new drug targets.

This is the third major Open Targets Genetics release; head to the Change log of the technical pipeline for more details.

These are the highlights of the new release:

These features are then used to train a classifier, which predicts causal genes at each locus using a curated set of a new repository of GWAS gold-standard for which we know the causal gene.

The new L2G score is a well calibrated metric that is moderately predictive of gold-standards. It's a study-specific score that provides a much improved gene assignment compared to the original ‘Variant-to-Gene’ (V2G) score in previous releases of Open Targets Genetics. Given the study-specificity nature of the Locus-to-gene score, it is important to examine gene prioritisations across multiple studies with this initial version of the score. In the future we will investigate approaches to aggregate gene assignments across several studies for the same phenotype, including orthogonal approaches such as phenotype-wide network enrichment analysis

Where to view the L2G score in the user interface?

You can view the list of genes prioritised at a given locus in a new table in the study-locus page (defined by a study and a lead variant). This page is accessed through clicking the 'gene prioritisation' button on the 'gene' or 'study' page.

In this new table, we prioritise and rank genes by their "overall L2G score" but also provide the contribution of each of the individual features to the evidence linking the gene to the study based on the functional genomics data below: 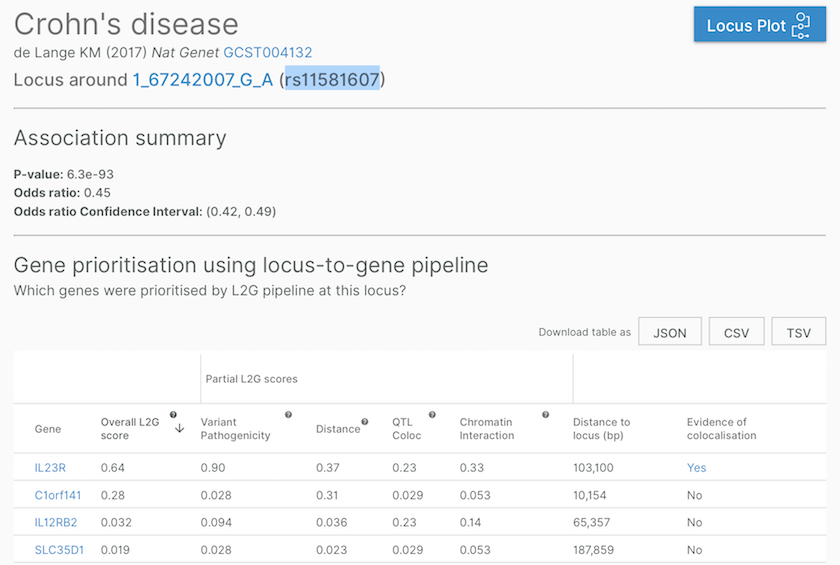 Gene assignment at a Crohn's disease-associated locus, defined by a study (de Lange KM (2017) Nat Genet, GCST004132) and a lead variant (167242007GA, aka rs11581607). Note the last column, where we flag whether there is a colocalisation evidence supporting the gene assignment.

We have curated a list of ~450 gold-standard GWAS loci, for which we are confident of the causal genes based on four classes of evidence:

For each gold-standard GWAS loci, we have assigned a confidence rating of high, medium or low depending on our assessment of the strength of supporting evidence.

For any study page, we now have three new columns with the results of prioritised genes according to three pipelines:

For any gene page, we now provide a list of associated phenotypes based on the new L2G score. 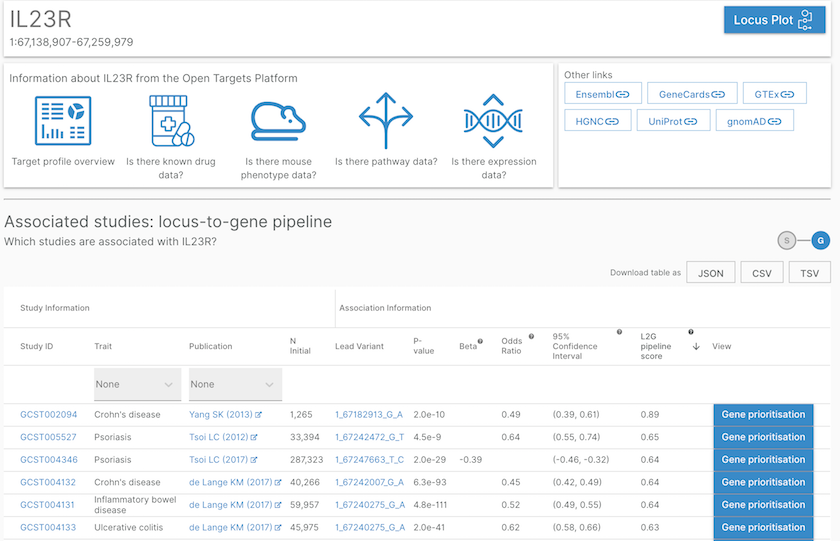 In addition to visualising this data in an interactive user interface, you can also download the entire data from: