The latest release of the Open Targets Platform — 20.11 — is now available at https://www.targetvalidation.org/.

The release features data updates from many of our data providers and internal data pipelines. We also continue to see the benefits of the ongoing improvements in our genetic association evidence, specifically with increased ClinVar evidence provided by EVA and Genomics England PanelApp data.

For more details, check out our utils/stats API endpoint and our 20.11 release notes.


Prior to this release, our colleagues at EVA provided us with rare disease variant data from ClinVar that have a clinical relevance rating of "pathogenic", "likely pathogenic", "drug response", "association", or "protective". However, this meant that the Platform only had ~188,000 out of more than 1.1 million possible evidence strings. 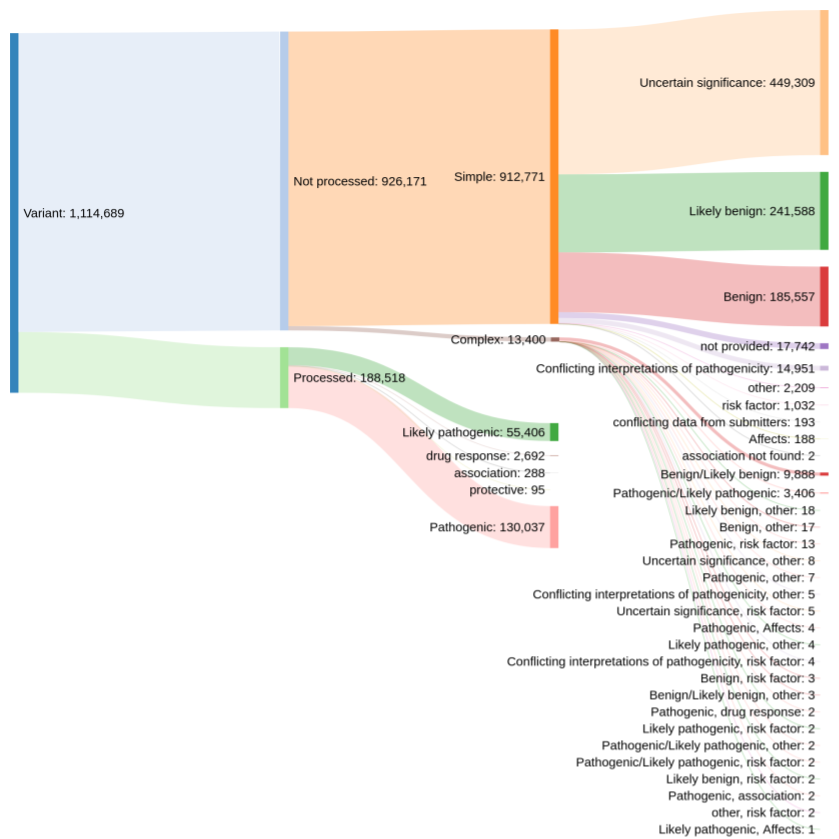 And so over the past few months, we have worked closely with EVA to expand and enhance the ClinVar data included in the Platform. By including variants with other clinical significance ratings — such as "risk factor", "affects", and "conflicting interpretations of pathogenicity" — we now have more than 793,000+ evidence strings from ClinVar that build new target-disease associations and strengthen existing ones. 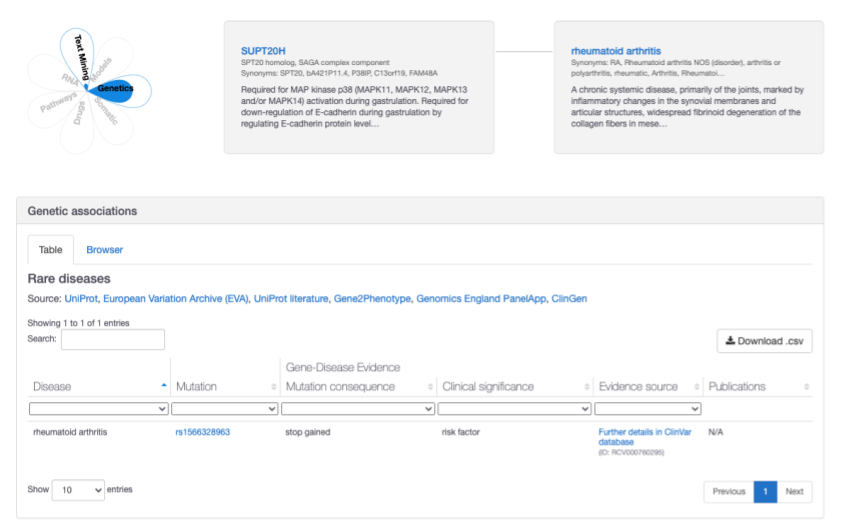 Other associations that benefit from new ClinVar evidence include:

With the increase of evidence strings, we have also adjusted how we score ClinVar data for rare disease genetic associations — see our association score documentation page for more information.


Alongside our work with EVA on ClinVar data, we also established a close working relationship with Genomics England to better integrate their PanelApp data into our evidence generation pipeline.

Previously, we only included genes with a "green" confidence level on version 1+ panels, which resulted in approximately 10,000 evidence strings.

However, after improving our disease mappings and re-running our internal pipeline to include "amber" confidence levels, the number of evidence strings in 20.11 has increased to 20,911. 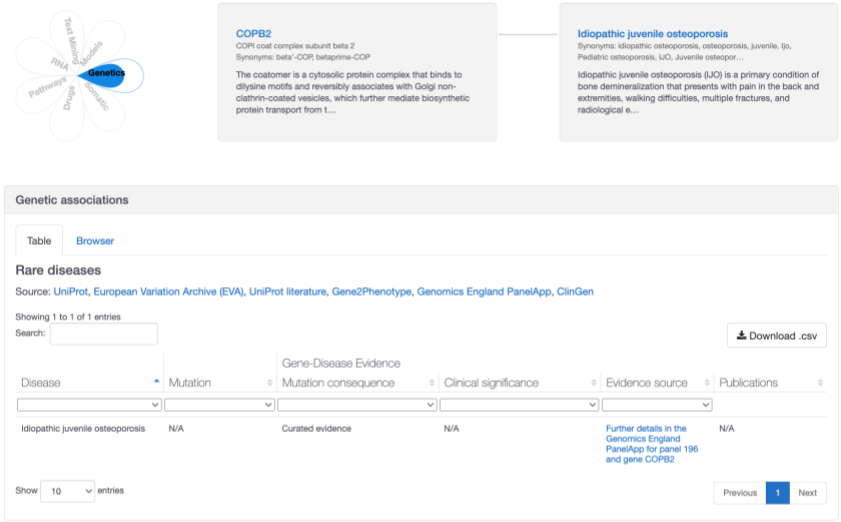 In this release, we have also seen an increase in data from PhenoDigm as we have integrated data from IMPC data release 12.0 and that has resulted in more than 115,000 new evidence strings. The increase in evidence can also be attributed to the work of our data team in updating the OMIM-EFO xrefs to version 3.23 of EFO.

Similarly, we have also rerun our internal PheWAS Catalog and CRISPR pipelines to capture new disease terms included in the latest version of the Experimental Factor Ontology (EFO 3.24).

After reviewing the 284 somatic evidence strings submitted by our colleagues in UniProt, we found redundancy and duplicated evidence when compared to the other data sources that contribute somatic evidence — EVA (ClinVar) somatic, IntOGen, and Cancer Gene Census. As such, we have made the decision to remove UniProt somatic as a data source.

Uniprot still remains an important source of evidence when it comes to literature curated target-disease evidence collected from different sources including OMIM. Moreover, we continue to work with our Uniprot colleagues to expand to other potential resources such as target-disease relationships in the context of infectious diseases.

To improve the reliability of our tractability category assessments for the small molecule workflow, we have adjusted the ordering and categorisation of the buckets:

Check out the new, redesigned Platform


Throughout 2020, we have been busy working on a redesigned version of the Platform that brings a range of improvements, including:

Any questions or feedback about our 20.11 release or the redesigned Platform? Get in touch with us at support@targetvalidation.org or @targetvalidate.

What does a bald soprano have to do with genetics? If you’re Eddie Cano-Gámez, Eugene Ionesco’s absurdist play, The Bald Soprano (La Cantatrice Chauve), teaches you everything you need to know