At the Lab Meeting on the 10th of February 2021, Open Targets had the pleasure of hosting Professor Kiran Musunuru from the University of Pennsylvania, who discussed his work into the genetic basis of coronary heart disease.

Kiran is a practicing cardiologist, active teacher, a professor of cardiovascular medicine, and Senior Scientific Advisor and co-founder of Verve Therapeutics. His research is at the intersection of epidemiology, stem cell research and genome editing, with the overarching aim of identifying genetic factors that protect against heart diseases, and using them to develop new therapies — a goal that strongly aligns with the mission of Open Targets.

During his virtual visit, Kiran shared some fascinating insights with us about his research and his perspective on target identification, validation, and translation into the clinic. 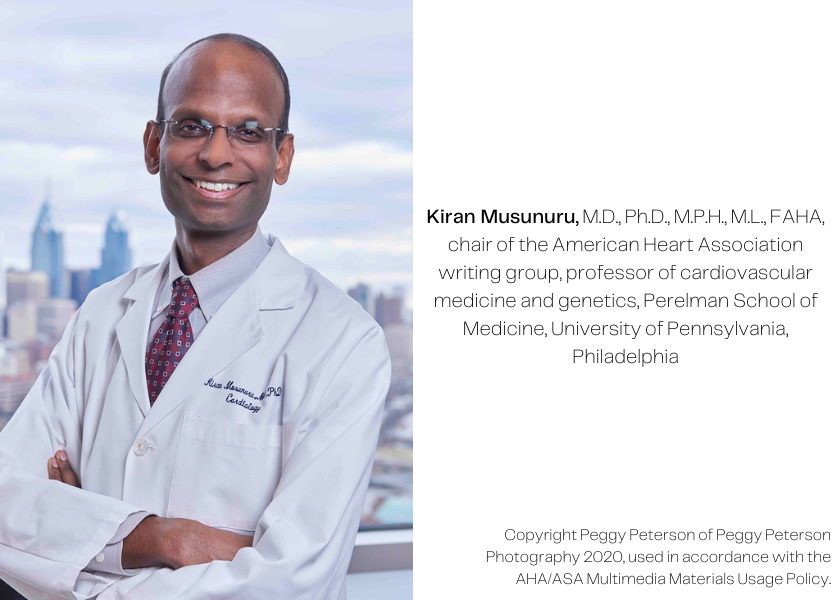 You’re both a clinician and a researcher — how do you divide your time? (And when do you sleep?)


Splitting my time between my roles at the University of Pennsylvania and at Verve Therapeutics has definitely been complicated by the pandemic. With the academic labs shut due to the pandemic, I have been spending most of my time at home, trying to run my laboratory remotely while doing part-time advisory work for Verve. To add to the complexity, I spend several weeks a year taking care of cardiology patients at the Hospital of the University of Pennsylvania, which has meant being hypervigilant about COVID-19 precautions.

When life was ‘normal’, I would sometimes spend two thirds of my time travelling. The promotion process within academia depends on developing both a national and international reputation — you have to see and be seen. In that sense, the pandemic has allowed me to focus more on science, which I have been enjoying.


Your research aims to develop new therapies based on genetic factors that protect against heart disease. How did your journey into this topic start?


Thirteen years ago now, I started my postdoctoral research with Sek Kathiresan at the Massachusetts General Hospital and the Broad Institute in Boston. We were looking for a project and came across the story of Anna Feurer.

Anna was diagnosed with familial combined hypolipidemia after getting a spot check for cholesterol at a local health fair. Physicians were shocked by how low her lipid levels were — they had never seen such low cholesterol and triglyceride levels. Anna and her siblings were referred to Gustav Schonfeld, and for a decade, Schonfeld unsuccessfully tried to determine the genetic basis of their condition.

At the time, the Broad Institute had just acquired the capacity to do exome sequencing, so we thought to use that technique to study Anna and her family. Promisingly, we identified one gene shared by the siblings, with two different nonsense mutations in angiopoietin-like protein 3 (ANGPTL3).[1]

Simultaneously, the Global Lipids Genetics Consortium undertook one of the largest Genome Wide Association Studies (GWAS) at the time, with more than 100,000 individuals. Of the 95 loci with genome-wide significance, a common variant near ANGPTL3 was linked to both LDL cholesterol and triglycerides. [2]

We then used two newly developed approaches to gain further functional insights into this locus: expression quantitative trait locus (eQTL) mapping in induced pluripotent stem cell-derived hepatocytes from 90 individuals, and massively parallel reporter assays (MPRAs). We found a single SNP in the locus that displayed a regulatory effect on expression of ANGPTL3. In other words, we had identified a candidate causal variant and a gene.[3]

We knew that ANGPTL3 was a compelling therapeutic target — if only we could establish a link between ANGPTL3 and coronary heart disease. Mutations in the ANGPTL3 protein reduced levels of LDL cholesterol and triglycerides, but it took seven years, until a burden test led by the Myocardial Infarction Genetics Consortium, to show that this resulted in decreased risk of coronary heart disease.[4]


ANGPTL3 is a compelling target because we know from the Feurer family that a complete loss-of-function doesn’t appear to have any deleterious consequences. In fact, some evidence suggests that such a loss of function may also protect against other diseases such as type 2 diabetes.

Another advantage of this gene is that it is only expressed in the liver, and as such, is particularly suitable for targeting; many drugs circulating in the blood will eventually be picked up by the liver. ANGPTL3 could be targeted using antibody-based drugs, antisense oligonucleotides, siRNAs, and therapeutic genome editing.

In your opinion, what were some of the biggest challenges in going from genetics to target identification?


I was lucky to have the luxury of thoroughly investigating individual genes like ANGPTL3, so I was able to take the time to develop a mouse model to test missense variants. But if your goal is to study large sets of genes, for example from an exome-wide burden test, you have to rely on in silico prediction analysis, because you’ll never be able to do a functional analysis of all the genes in the genome.

In silico prediction can help to prioritise genes and identify good candidates for follow-up studies, but it doesn’t provide any information on causality, and it isn’t perfectly reliable: we followed up on 11 variants of ANGPTL3 predicted to be full loss-of-function variants, but only 2 turned out to be loss-of-function.

You’re currently working towards creating a ‘one shot’ vaccination against heart attacks. How would this work?


Drugs against ANGPTL3 have already been developed. Evicanumab is a monoclonal antibody against the protein, and through regular intravenous or subcutaneous injections, has led to substantial reductions in LDL cholesterol in patients refractory to other treatments.[5] It’s an amazing proof-of-concept, but a daunting, lifelong course of treatment.

Therapeutic genome editing, on the other hand, would only require one treatment. Using base-editing, which is safer and more precise than CRISPR, we would introduce a loss-of-function variant in ANGPTL3. This wouldn’t address the primary genetic lesion, but would introduce a complementary change to reverse the pathogenic mutation.

Such a ‘one and done’ treatment has several advantages, such as reducing the stress of repeated treatments for the patient, and addressing the issue of patient adherence. From a medical perspective, such a treatment with a continuous effect is intrinsically superior to a drug which must be administered periodically, and therefore varies in effect.


What do we know about the evolutionary function of this gene? Over the long term, do you think there is any danger with such a permanent therapy?


Ultimately, we are looking to achieve homeostasis, an optimal dose of circulating triglyceride particles. In order to achieve this happy medium, we have evolved genes that both inhibit and amplify lipid production. Genes like ANGPTL3 and PCSK9 are found all across the phylogenetic tree, and possibly evolved at a time when nutrients weren’t easily available. In a modern day context, when nutrients are more readily available, they are no longer necessary.

Any treatment implies some balancing of the benefits of the treatment against the risk. One roadmap would be to first administer therapeutic genome editing in patients with the highest risk of coronary heart disease, such as those with familial hypercholesterolemia. We would analyse their progress and collect safety data before moving on to the next level of risk, for example using genome editing as a secondary prevention for patients who have already suffered a myocardial infarction.

Ideally, one day we would be able to use this treatment as a primary prevention for patients who are healthy but at risk of cardiovascular disease in the future. This would effectively be a ‘vaccination’ against heart disease. From a drug discovery perspective, a major advantage of this approach is that the treatment is relevant across the board. 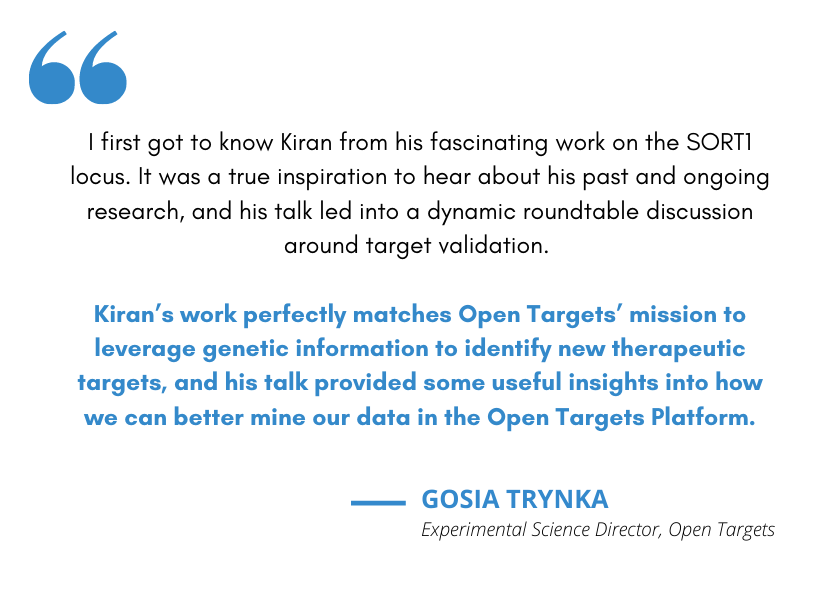 [4 minute read] How do you prepare for a virtual interview? What is the remote onboarding process like? Open Targets project manager Kostas Tsirigos tells us about his experience.

[5 minute read] Why are few open access cancer GWAS summary statistics available? We call on researchers, journals, funders and charities to support and spread our message.