These are the stats for this new release:

We've had a whopping increase in the number of associations and evidence since Open Targets Platform release 19.11, mainly due to a brand new data source.

Keep on reading to learn more.

We are super excited to announce that we now source our evidence for common diseases from Open Targets Genetics, which replaces the GWAS Catalog data in the Open Targets Platform release 19.11 (and earlier).

As opposed to the GWAS Catalog evidence, where the lead variant is assigned to the closest gene, the new data source, Open Targets Genetics Portal, uses a machine learning (ML) framework (locus-to-gene score) that integrates credible set analysis with functional genomics data to prioritise genes at all trait-associated loci. This approach uses a learned model with a curated set of gold standards (associated loci for which we know the causal gene) and produces a well calibrated score that is moderately predictive of gold-standards. 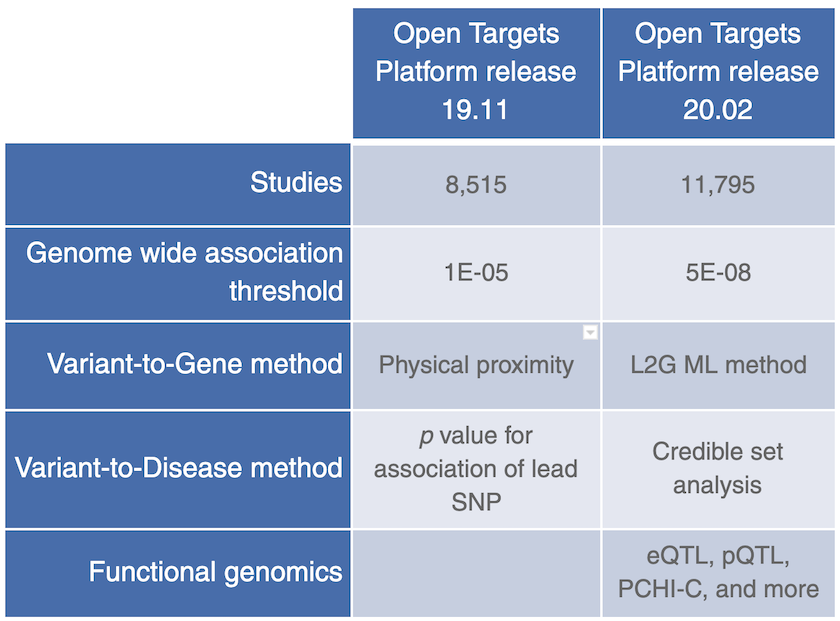 Each and every single piece of evidence from this new data source is now scored differently from its previous implementation for GWAS Catalog evidence.

It’s worth noting that we continue to import other data sources for genetic associations in the Open Targets Platform, namely:

Moving from germline variants to somatic mutations: we are also pleased to have the latest intOGen data from the BBGLab at the Institute for Research in Biomedicine in Barcelona.

To celebrate this new data, we’ve caught up with Francisco Martínez-Jiménez to learn more about intOGen in our latest Q&A blog post.

ChEMBL26 has yet to be released, but we have managed to get hold of their latest data just in time for our new release! 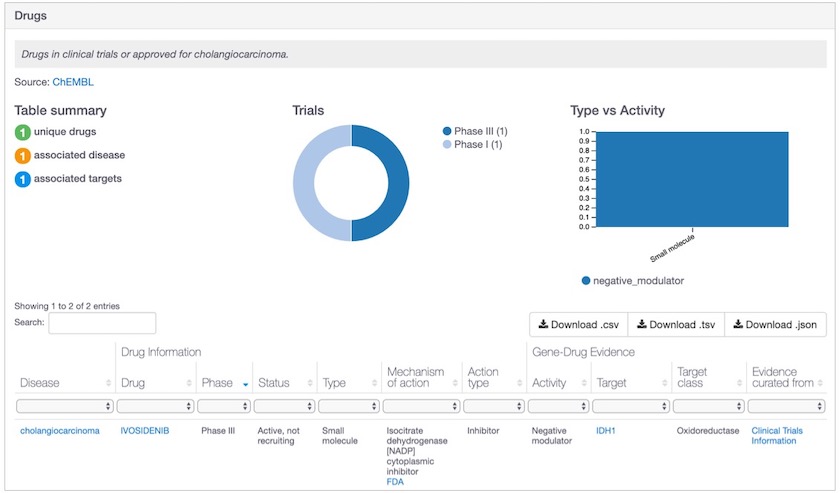 Ivosidenib is one of the new drugs in the Open Targets Platform, now used as evidence for IDH1-cholangiocarcinoma association.

In this release, we've included the latest Target Enabling Package (TEP) for MTHFR.

We've also added nine extra chemical probes from the Donated Chemical Probes. Whilst one of the probes (BAY-899) is an allosteric antagonist of LHCGR, the remaining eight are all inhbitors of the targets below:

Check the overview of all probes page and make your order directly from the Structural Genomics Consortium website.

We currently have three job openings to join Open Targets and work on some of our exciting projects in Informatics and Neurodegeneration:

We have a new team member in the Open Targets Platform core team.

Daniel Suveges comes from the field of Structural Biology and before joining us he was in the GWAS Catalog team at EMBL-EBI and prior to that he worked in the Zeggini group at the Wellcome Sanger Institute.

We wish Daniel all the best in his new role as our Senior Bioinformatician.

Get in touch if you want to discuss this new release, have questions regarding the current job openings or want to say hello to Daniel.

In the meantime, best of good luck in our target identification and prioritisation endeavours!

We are pleased to announce the latest release of Open Targets Genetics (March 2020) is out with a new locus-to-gene score to prioritise protein-coding genes at all published GWAS-associated loci.

Open Targets meets colleagues at the Institute of Cancer Research in London: potential collaboration ahead of us